SIGN THE PLEDGE: Support and pray for Archbishop Viganò 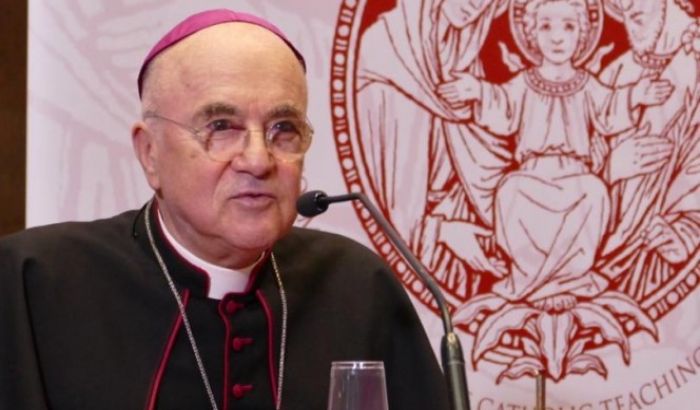 Archbishop Carlo Maria Viganò is being attacked for releasing an explosive 11-page statement revealing Pope Francis knew about the strict canonical sanctions imposed on the now-disgraced Cardinal Theodore McCarrick by Pope Benedict XVI, but evidently chose to lift them.

Viganò, who served as the papal representative in America from 2011-2016, says he informed Pope Francis about McCarrick's sexual abuses after his election in 2013. Despite warning the Pope about the gravity of McCormick's deviant behavior, Viganò says Francis not only "continued to cover him" but made him a "trusted counselor" who helped appoint a number of bishops in the United States, including Cardinal Blase Cupich of Chicago and Joseph Tobin of Newark, two Cardinals who oppose Church teaching on homosexuality.

Viganò also alleges that Cardinal Donald Wuerl was "well aware of the continuous abuses committed by Cardinal McCarrick" but still nevertheless allowed him to to reside at a seminary in Washington D.C., which put other seminarians at risk.

Viganò courageously exposed many other high-ranking Vatican officials for covering up sex abuse and promoting homosexuals, including Cardinal Tarcisio Bertone, Secretary of State under Pope Benedict XVI, and Cardinal Pietro Parolin, Francis' Secretary of State, who Viganò says "was also complicit in covering up the misdeeds of McCarrick."

Viganò is being attacked primarily by liberal Catholics in the media and by colleagues in the Vatican and in the United States, who claim they knew nothing about the abuses committed by Cardinal McCarrick. Pope Francis refused to comment on the veracity of Viganò's statement when asked about it during his flight back from the 2018 World Meeting of Families in Dublin.

There are Catholic prelates defending Archbishop Viganò. Msgr. Jean François Lantheaume, the former first counsellor at the apostolic nunciature in Washington, said Viganò told "the truth." Bishop Joseph Strickland of Tyler, Texas said "Let us be clear that they are still allegations but as your shepherd I find them to be credible.” Bishop Athanasius Schneider of Astana, Kazakhstan said there is “no reasonable and plausible cause to doubt the truth content of the document of Archbishop Carlo Maria Viganò.” Likewise, Cardinal Raymond Burke said Viganò's claims "must be totally taken to heart by those responsible in the Church."

In comments to LifeSiteNews on August 25, Archbishop Viganò said, "The main reason why I am revealing this news now is because of the tragic situation of the Church, which can be repaired only by the full truth, just as she has been gravely injured by the abuses and coverups. I do this to stop the suffering of the victims and to prevent new victims, and to protect the Church: only the truth can make her free."

Viganò said the second reason he chose to write his testimony is "to discharge my conscience before God of my responsibilities as bishop of the universal Church. I am an old man and I want to present myself to God with clean conscience."

"The people of God have the right to know the full truth, also regarding their shepherds," he said. "They have the right to be guided by good shepherds. In order to be able to trust them and love them, they have to know them openly in transparency and truth as they really are. A priest should be a light on a candlestick always and everywhere and for all."

Your Excellency, thank you for your courageous decision to release your painful testimony exposing lies, deceit, and corruption going on in the Vatican.

We know you have risked your own reputation and perhaps even your safety in going public out of love for the Church and in order to be faithful to Christ.

We love you and support you for giving us, the People of God, the truth about our shepherds. As you have said before, echoing Christ, only the truth can make the Church free.

We stand by you during this time of tribulation and pray fervently that God will protect and guide you in your efforts to serve Him faithfully. May His Angels surround you, may Our Lady wrap you in Her mantle and lead you always in the Way of Her Son.